What Happens When Cannabis Meets Yoga?


People have been using cannabis for wellness for thousands of years. Whether it was for the purpose of curing their ailments or communing with a Higher Power – cannabis has played a pivotal role in the evolution of humanity.

While the plant was forcefully prohibited by a handful of people in the 1930s and then again in the 1970s – it has come full circle and is once more on the verge of being legalized. However, over the past few decades – the government invested billions (if not trillions) in negative propaganda surrounding use.

This has tarnished the good name of cannabis and as a result – there is still a lot of stigma surrounding use. While this is changing, it could be due to people like Tara Mina who runs a Yoguana studio where people can come together, smoke cannabis and do yoga.  Cannabis strains for yoga meditation became a big search term.

She claims, “Instead of using your cannabis and going home and sitting on the couch eating Doritos, you can practice yoga, address those issues, relax your back, relax your anxiety, build your self-confidence and go within and find your power,” Mina said.  (SOURCE ABC-7)

This is just one example of how people are slowly beginning to change the public perception of cannabis.

Mina has a point though – cannabis makes perfect sense to be used in conjunction with yoga. I have done a few yoga sessions while totally baked and it’s definitely a trip.

Here’s a couple of reasons why Yoga and Cannabis make such good bedfellows.

Cannabis loosens you up

Yoga is filled with holds and stretches, allowing you to really become grounded in your body. Cannabis helps you relax, which is key for holding these poses and doing these stretches. Cannabis will help you let go of the resistance and learn to relax in these uncomfortable positions.

Of course, some might argue that it’s best to be sober when engaging with yoga in that the lesson itself sits within the discomfort – but trust me when I say that being high will still allow you to feel uncomfortable as you’re holding boat pose for 20 seconds.

Cannabis gets you in the zone

If there’s something about cannabis and physical activity – it can quickly get you into the zone. In Yoga, you’re simply following your breath as you go through an asana, completely present in the moment of now.

Smoke a bit of weed and you’re not just “present” – you’ll be glued to this moment of reality, going through the motions – feeling it deep within your core. I have had some deep revelations during the savasana portion of the asana after eating an edible.

You can really get into the mind of a corpse in corpse pose.

When you smoke weed and do yoga, you can “connect” to the session in a more profound manner. Of course, you can do that without the cannabis – but weed is like a cheat code in that sense. It simply allows you to be a bit more “free” from your typical inhibitions.

Smoke a joint or eat an edible and sure enough – you begin to notice small sensations in your body, things you typically don’t focus on. You become more sensitive to the subtle communications of the body.

Downsides of Weed and Yoga

I don’t always do yoga high.

I actually prefer to be completely sober for most of the times. The reason is because there have been times when I did smoke a bit too much weed before a session.

Cottonmouth distracted me from what I was trying to achieve. One time, I felt the effort of yoga significantly increased after a smoke session. In both cases, indica dominant strains were to blame.

Whenever I smoked Sativas, I would feel more energized and focused. However, once I smoked a sativa that didn’t allow me to focus at all.

Despite all of this, most of the time that I smoked weed and did yoga I didn’t have a problem. In most cases, I experienced the benefits – yet because of these unpredictable highs, I decided that personally I prefer to smoke weed after the session, and not during.

This is just personal preference, but I thought it was important to also showcase the potential negatives of doing yoga and cannabis at the same time.

Why you definitely should try Yoga and Weed at least once in your life!

I think one of the biggest benefits I have had from a Canna-Yoga Session was the extreme destressing effect it had on me.

I remember once I was getting headaches due to the stress I was holding in my shoulders. Smoking weed couldn’t relax me on its own – I felt the tension locked into place.

And then, I once ate a half a brownie and did a full hour of yoga. Needless to say, I left all of the tension on the mat that day!

The meditation at the end proved enlightening! I knew what was causing me stress in my life and had a clear idea on how to reduce it in my life.

I don’t know if I would have experienced this revelation without the combination of weed and yoga and so, if you’ve never experienced “Yoguana” I recommend doing it a few times to see if you like it.

We’re going to be seeing combinations like Yoga and Marijuana become more prevalent over the coming years. As cannabis becomes more popular, it’s only going to become more engrained into society until one day all stigma is gone from use.

Why don’t you help this process along and see if there’s Yoguana near you, and if there isn’t – just smoke a bowl, go on Youtube and find yourself a nice asana and go to town.

If you’re dealing with stress and want to take an active approach to letting it go – this is a stellar option! 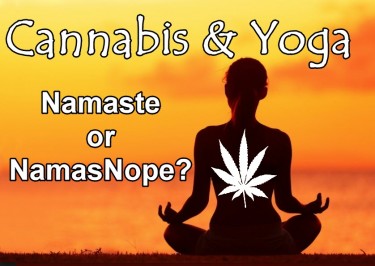 CANNABIS AND YOGA,ARE THEY A PERFECT MATCH TO MEDITATE?

The Narc Drones are Coming!