The Narc Drones are Coming!


Nevada county’s cannabis alliance has announced that the next course of action is the deployment of drones to locate illegal cannabis farms.

Illicit operations in California are overshadowing the legal operators. For this reason, before settling on this resolve, some stringent measures have been taken but to no avail.

The prospect of having this would mean that Nevada county will be more or less a dystopian region that will have drones flying above the sky for some weeks or even months. All these to locate a set of illicit operations within the county.

Nevada County Cannabis Alliance is not alone in the struggle against illegal cannabis operations. The entire cannabis industry in California is being impacted negatively by the black market industry. This is major because these illicit operations cause an oversupply of products into the market.

Most times for illegal operators to do away with their harvests as quickly as possible, they tend to lower the regulated prices of the products. This way they lure most of the customers away from the licensed cultivators in the county. These illegal cannabis operators are getting bolder by the moment, for example, they have taken up residence in the Mojave Desert. In this arid land, thousands of illegal cannabis crops can be found here.

A source once disclosed that agents have tried all they can to fend off these illegal growers from California, however, they keep coming back to the area they went sent off from in days or months after the raid.

The groups of cannabis growers that belong to the Nevada County alliance have expressed their grievances and have decided to adopt the use of drones in a bid to fish out the unlicensed growers.

The officials of Nevada County believe that one-third of cannabis-related complaints point at farms within fences, locked gates, and other visual barriers. The building director of Nevada County, Craig Griesbach, revealed that two of the reported sites have been determined to be the starting points of wildfires.

In 2020, one of these wildfires started during the Jones Fire. The union was forced to redirect air attack resources away from the Jones fire to prevent the wildfire from spreading excessively. This decision saved several lives and properties.

According to Craig, the union believes that the use of drone technology can be implemented to ensure all farms keep to the laid down regulations for cannabis sites.

For example, the presence and use of generators are violations of cannabis laws. These power machines are not permitted to be on-site, as they are the major root causes of fire incidents. Drones can mitigate these types of accidents.

Drones require expertise and technical know-how to be operated. For a pilot program to commence, tools and staff training must be processed.

The country code and compliance divisions program manager has disclosed that with a budget of $10,000, some tools can be procured for this program. Mr. Merriman also disclosed that funds to be used to train staff will be gotten from the general fund allocation.

Nevada county cannabis alliance has indicated that a pilot program will be launched next spring. The county will begin to use drones to find out the locations of illicit cannabis cultivation operations. The risk of having avoidable wildfires is one of the justifications used to ensure the program kicks off by March 2022.

Details about the Pilot Program

Steps are being taken to purchase all the required equipment before the program commences in March. The pilot program is expected to run for five months, from March to August 2022.

The plan is that by November 2022, the review committee will make their findings to establish whether or not the program fulfilled its purpose. The review will be concluded by February 2023, after which all the information obtained will be submitted along with a comprehensive report to the program’s supervisors and other stakeholders in the industry.

The selected staff will also be trained from now till March. Merriman said that the staff permitted to handle the drones will come from the cannabis compliance division field staff.

Training is scheduled to take about 10 to 15 hours. At the end of the training, a compulsory licensing exam will be conducted for the trainees to hold a drone pilot license. Tests will be carried out annually through the Federal Aviation Administration (FAA) to ascertain that pilots are still fit enough to pilot these drones.

When the pilot program begins, any accident or attempt to shoot the drone down by external forces must be reported to the cannabis program manager. The manager will then be required to file an incident report, citing if it’s a malfunction accident, or sabotage, with the office of Nevada County’s Risk Manager. By law, the FAA must also receive a detailed report of the event within 10 days.

California’s Legislature Supports The Use of Drones

Recently, the federal government made efforts to track down illegal cannabis sites within California’s borders. During this time, California’s house committee on appropriations supported the idea that drones could be used for this measure.

For this measure to be more effective, the domestic production of drones must be improved on and issues around cybersecurity have to be resolved for these drones to be trusted.

Another issue will be how to guarantee the privacy of residents within Nevada County. A law professor at the University of Pacific said that the officials have the backing of the fourth amendment projections to carry out drone operations.

The effort is being put together to raise enforcement against illegal cannabis crops. These sites have to be identified, and drones are equipped to obtain the much-needed information.

As soon as these illicit operations are detected and consequently destroyed, legal operators will have a lesser competition to tackle and the excess abundance of the products will be a thing of the past.

For California’s cannabis industry to succeed, enough focus must be directed at detecting illicit cannabis grow operations. More opportunities can then be created for additional license types to be procured. 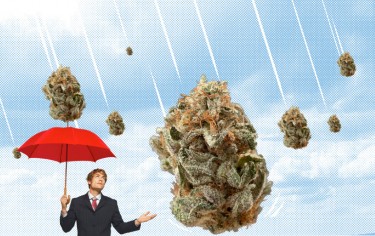 DRONES ARE DROPPING WEED FROM THE SKY IN ISRAEL, SAY WHAT?

What Happens When Cannabis Meets Yoga?