The cannabis enthusiasts and users in Tennessee have an early gift in 2021, and we are here for it!! The state has introduced a marijuana legislation bill set to roll out in 2022, and that is a most laudable move for the future of cannabis in the state.

A Tennessee lawmaker introduced the legislature to the 2022 ballot, which will set the pace for a more solidified cannabis industry in the state. Rep. Bruce Griffey, who is a Republican from District 75, is sponsoring the bill, which is now called ‘House Bill 1634”.

The bill will need county election commissions that entail three cannabis-related questions. It is expected that the questions will be non-binding and also appear in November 2022 on the ballot.

Afterward, the secretary of state will gather the public opinion poll results carried out about cannabis. The results will be shared with members of the state’s general assembly.

The move to legalize cannabis in 2022 is not the first time such a significant move was made. Tennessee’s journey with the medical cannabis bill started a while back when it was first passed into the senate committee, but it failed with the second effort. There was a small victory when the legislative arm approved the study commission and expanded its local cannabis law.

So currently, Tennessee doesn’t have legal medical marijuana. It is also only one of the 14 states without a medical system in place. The Senate Bill 854, sponsored by Senator Janice Bowling, would have been the opportunity to legalize medical cannabis for some patients.

The bill also aimed at developing a medical cannabis commission that will help with regulating the production and sale of marijuana. In March, the bill was approved by the Senate Government Operations Committee but subsequently banned it later that month.

Although the bill didn’t pass, Senate Bill 118, which aims to create a study commission to look into medical cannabis, will report to the legislative arm about legal cannabis at the end of the year. This bill will expand the access to CBD in the state and allow for more medical issues to be listed so people can use CBD oil to treat their illnesses and pains.

Tennessee is a minority state that still penalizes its residents with jail time for possessing marijuana. About 18% of states in America still penalize their residents for having marijuana, and in Tennessee, it is still a reality. It is so bad that a person can get legalized for possessing up to an ounce of marijuana or even less. The penalty could be up to almost a year in prison.

At present, 81% of voters in Tennessee support the notion that patients and doctors should make decisions bout medical marijuana. This means that there will be much progress in the medical sector, and it can make a large number of voters support the legalization of cannabis “If” it is placed on the 2022 ballot.

The voters in Tennessee also seem to support cannabis with all the proposed ideas, but the state lacks a voter initiative process. Only elected officials can alter its laws in the state, which means the ballot idea for 2022 will not make legalization happen. Instead, it will be a significant step forward for such a conservative state.

Some exceptions to the current Tennessee rule

Cannabis doesn’t have any concrete legal program in Tennessee, specifically for medical and recreational products. There are some exceptions to this law as high-CBD ad low-THC oil for patients are allowed. It has to be patients who experience seizures.

For a conservative state, such an exception is considered a positive impact on society, but cannabis experts still think there is more to be done. After all, the cultivation and possession of cannabis are illegal, with punishment tilting towards prison time.

Also, in Tennessee, the cultivation of 10 cannabis plants or less is considered a felony, resulting in six years of prison time. The prison time could be more if the person were caught growing more plants.

In 2016, the Tennessee law was changed such that anyone facing a third marijuana conviction can no longer get a felony charge or up to six years in prison. This punishment was reduced and given a misdemeanor label so people who use marijuana won’t get a felony tag on their records (that is, permanent records).

The struggle with a conservative society

Understandably, Tennessee needs to take things slow as they rise above the strongholds of conservatism. Some states like Tennessee that are projecting into 2022 for cannabis legalization are also dealing with drawbacks from its residents who still negatively label marijuana.

Hence, having giant projections into the future is a good move; it will prepare the residents for the changes. Like many other states, Tennessee now realizes tremendous potential with the cannabis market and is ready to tap into it.

The question has always been ‘When?” Well, we’ve got a date with the state of Tennessee: 2022, and now the countdown begins! Will Tennessee meet the moment in 2022? That is yet to be seen.

It is safe to say that “2020 Christmas arrived early” for cannabis enthusiasts in the state of Tennessee as the state is set to take a bolder approach towards cannabis legalization. But the state is still blocking off decriminalization efforts.

The states of Nashville and Memphis have passed ordinances that allow officers to charge people with a civil infraction for holding small amounts of cannabis. However, the governor at that period, Bill Haslam, signed the bill, which asserts explicitly that state laws forestall the local government from handling substance regulation.

Yes, we are all excited about 2022, but there is still so much to do to prepare Tennessee for that stage, and we hope that there will be tenable changes from this moment onwards as this will guarantee a legalized cannabis system. 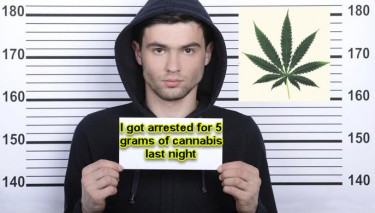 I GOT ARRESTED WITH 5 GRAMS OF WEED IN TENNESSEE, READ THIS!

There is a Koch in Cannabis