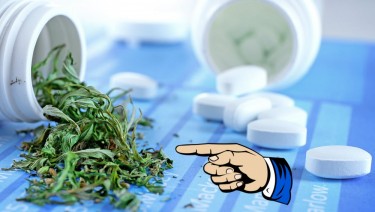 Pain is a natural and unavoidable occurrence in the human body. It is one of the body’s responses to self-healing. But, sometimes it gets too much and painkillers have to come into the picture.

Ibuprofen is one of the most effective drugs for alleviating chronic pain symptoms. People get relief from headaches, toothaches, and backaches by using this drug.

More than 50% of the American population has used ibuprofen at one point or another. Unfortunately, it sometimes comes with side effects like ulcers, etc.

Now, with the newly tested and proven therapeutic qualities of the cannabidiol compound, one is left to assume that CBD may be an effective alternative to treating pain. But, CBD has not been approved for medical use yet.

The fascinating effects of CBD as a natural supplement have gained popularity and what makes it more appealing is that it does not seem to have severe side effects based on the research carried out.

Here we’d be comparing both compounds to check if the all-natural panacea called CBD is effective enough to replace ibuprofen as the go-to medication for pain.

The cannabinoid is extracted from hemp. There are different extraction methods, but the commonly used safe method is extraction using solvents like ethanol or carbon dioxide. After extraction, the CBD molecules are converted into topical, oil, or capsule gel form.

This drug is developed from propionic acid. This fatty acid is used for its antibacterial qualities in the lab, and it is also used to repel the onset of mold.

When ingested, CBD enhances the natural endocannabinoid levels, the EndoCannabinoid System (ECS) is its primary contact in the body. This system is a network of receptors found around the body and the brain. It is accountable for homeostasis functions like immune response, sleep, appetite, and pain.

CBD relieves pain by activating and encouraging the production of the CB2 receptors in the ECS.

Some researchers say that several conditions like migraines, irritable bowel, and fibromyalgia result from an endocannabinoid deficiency.

Cannabinoids work in conjunction with other body organs to manage pain, modulate pain thresholds and slow down the production of inflammatory particles.

When a body sustains an injury, internal or external, Nonsteroidal Anti-Inflammatory Drugs (NSAIDs) like Ibuprofen work by slowing down the production of prostaglandin.

Prostaglandin is the hormone that causes pain and swelling in response to the release of prostanoids.

The prostaglandin hormone is produced by the enzymes called cyclooxygenase, otherwise called COX.

Simply put, ibuprofen acts like other NSAIDs by reducing the activity of the chemicals produced by the body to fight off an infection, or injury.

One thing to note is that Ibuprofen is a non-selective COX inhibitor; the implication of this is that it elicits more side effects than other NSAIDs.

Benefits and Side Effects

According to researchers, CBD has the needed characteristics to help relieve pain associated with conditions like joint, muscle, and nerve pains, inflammation, chronic migraine, old injuries, cancer, back pain, rheumatoid arthritis, and osteoarthritis.

In addition to this, cannabinoids also have the potential to manage insomnia, mental disorders, psoriasis, seizures, acne, and other conditions.

Ibuprofen is an FDA-approved drug that is used to treat mild to intense pains, swelling, inflammation, and fever.

It is affordable and widely available; all pharmacies have ibuprofen in stock at all times. The smallest dose of this NSAID can provide relief to the user.

Not only is it often prescribed as a pain killer, it also helps prevent the formation of blood clots in certain diseases. Medical Doctors also prescribe it to patients with musculoskeletal injuries, as well as fever.

Side effects of CBD

Side effects after using CBD are rare. It is generally safe due to its non-psychoactive nature. The chances of you getting high or overdosing on CBD products are very little.

Researchers have not established a recommended dosage for CBD products primarily because it is yet to be approved by the Food and Drugs Administration.

If you fall into the tiny percent of consumers that may experience side effects, they include; difficulty in staying awake, dry mouth, dizziness, heartburn, and nausea.

However, these side-effects can only be experienced if the product is used in excess. More reason for you to start slow with a low dose.

Side Effects of Ibuprofen

While ibuprofen is very effective, it carries several risk factors that affect quite a significant number of users. The FDA says even the short-term use of ibuprofen is enough to increase a user’s risk of cardiac arrests and strokes. Some of the side effects are;

In extreme cases due to prolonged use of the drug in high doses, it could result in;

I must point out that the recommended dose of ibuprofen is 1200mg per day. It is oftentimes not encouraged for use among senior citizens. Statistically, ibuprofen is responsible for at least 3,000 deaths per year in this age group.

Is combining the two a bad idea?

Combining CBD with ibuprofen according to research is not a bad idea. Studies show that both compounds can be mixed without the risk of adverse effects. It depends on the user’s tolerance and sensitivity to both drugs.

Not all NSAIDs can be combined with CBD. Most especially naproxen and celecoxib; mixing either of these with CBD can be severe.

To be safe, make sure you consult your doctor before mixing ibuprofen and CBD. This is because while there has been no proven interaction between both drugs, your body could have a personal reaction.

For the FDA to approve CBD as a pain reliever, more research will be carried out to fully understand the complexity of the ECS and its interaction with CBD.

Until then, proceed with caution— purchase your products from only trusted sources.

MORE ON IBUPROFEN AND CANNABIS, READ THIS… 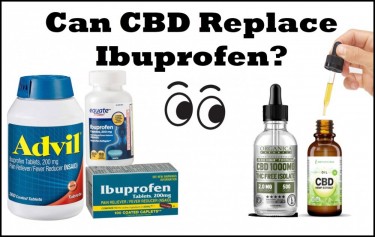 CAN CBD REPLACE IBUPROFEN, THE FDA CRACKS DOWN, CLICK HERE!